How To Sew And Finish An Open Garment's Faced Hem Corners

While it may look complex, finishing a facing at the hem is perhaps one of the easiest (most satisfying!) sewing techniques. 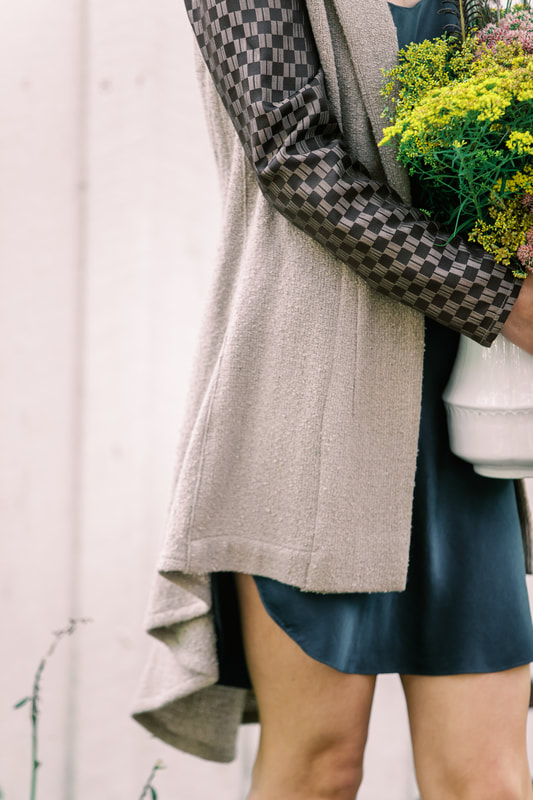 Finishing a facing layer at the garment’s hem is necessary with open front garments like jackets, coats, blazers and other tailored styles.
Anytime you work with a faced edge, the corner formed by the facing and garment layers at the hemline has to be handled in some way. When this corner is finished, it encloses all facing and garment raw edges resulting in a clean, professional sharp angle.
In order to take the correct consecutive steps at the faced corner, it is important to consider the finishing technique used on the entire garment hemline. Another question to ask yourself is whether the garment will be fully lined or unlined.
In the example below, the garment is unlined. Its hem will be finished using the double folded method. In this technique, the second fold is what makes the difference in how the facing layer interacts with the entire finished hem.
There are two classic techniques you can use to finish hems at a faced opening edge: One is finished by hand, the other, entirely machine stitched.  The choice is up to you and your comfort level.
With both techniques, the hem allowance that crosses underneath the facing is left untrimmed. Leaving the hem allowance intact all around allows the garment to be lengthened if needed at any point in the future.
Although untrimmed excess hiding beneath a facing layer provides lengthening versatility, garments made from bulky, textured fabrics work better if the unused hem allowance is trimmed. The end result should be a flat, well-defined hemline corner. This trimmed example will also be shown below.

This hemming technique features a double-folded, machine topstitched finish.
To start with, sew the facing to the garment opening edge. Understitch the facing layer if needed, and iron the finished faced edge. Before proceeding, the facing should be fully attached and pressed.
1. Considering that the garment used in this tutorial is unlined, clean finish the unstitched edge of the facing using the method of your choice.
Follow the tutorials in this section for guidance: Finishing Facing Edges
As you begin, keep in mind the fabric’s type and thickness- this can be a determining factor as to which edge-finishing technique works best.
In this tutorial, the fabric is a mediumweight cotton with an all front opening facing edge finished with exposed binding.

Finishing a faced hem corner by hand is as simple as folding and blind stitching.
Although it requires a bit of hand stitching, the excess hem allowance does not need to be trimmed. This provides a way to lengthen the hemline to its full capacity at a later point if needed. The hand stitched technique is also used with highly-decorative fabrics that cannot be machine stitched otherwise.
1. With the open garment on its wrong side, extend the facing layer outwards as shown, and fold the hem allowance up, ironing the fold as you go. Fold and iron the entire bottom edge including the facing.
2. Fold again and iron at the remaining hem allowance width. The resulting fold line should correspond to the garment’s finished hemline.
3. Bring the facing to the inside of the garment placing it in its natural finished position. In this alignment the garment's hemline fold should be perfectly aligned to the bottom facing fold.
The seam that connects the facing to the garment should run right along the very edge of the garment opening.
All layers should lay flat and smooth.
4. Insert a few pins through the facing and garment layer underneath to keep this alignment secured for hand stitching.
Fold, pin, and stitch the hem at the point, prior to sealing the faced corner by hand.
4. Using a slipstitch and matching color thread, hand stitch the facing's vertical folded edge to the garment layer underneath.
Learn more about blind stitching and how to slipstitch in this tutorial: Hand-Applied Blind Stitches
5. When arriving at the hem, change direction and continue slipstitching the facing hemline to the garment hemline cathing their respective fold lines as shown.
Keep the stitches as invisible as possible both on the garment’s face side as well as its underside.