​Tack stitches are placed at key points on the garment to hold or reinforce fabric layers in a certain position. Tacks are commonly used to reinforce pocket opening corners, keep facing layers flat, and maintain lining in its proper position on the inside of the garment. Tacks are also a great way to hold fabric layers together without introducing a seam.
There are a few different tack stitches used for both fabric edge and surface applications. In this tutorial, you will learn four (4) of the most widely used tacks in dressmaking: Arrowhead tack, bar tack, French tack and the cross tack. With the exception of the French tack, most tacks are applied to the fabric surface.

​A cross tack is formed by crossing diagonal stitches over each other to form an X. Single cross tacks are applied to hold fabric edges down at certain points. The best example of a cross tack application is when securing facing edges to the inside of the garment (shown in the steps below).
​Single cross tacks are easy to apply and provide just enough durability to permanently stabilize and direct fabric edges as needed.
How To Sew A Cross Tack
In this example, a neck facing's free-hanging edge is tacked to the garment’s seam allowance layers.
​1. Take a few straight diagonal stitches over the facing edge and garment seam allowance layer underneath. 3-5 stitches should be sufficient
2. Next, apply a second set of layered straight stitches crossing over the first set such that an X is formed. Again, the stitches should only go through the facing edge and garment seam allowance layers underneath.
​For best results, use the same color thread as the facing/garment layers. Doing so will ensure a clean, professional finish.

A bar tack is a straight tack used at packet corners, hand-applied buttonhole edges, and to keep folded cuffs up at certain points. It is for the most part, a functional application which can also be used decoratively.
A conventional bar tack utilizes a dense blanket stitch in its construction to provide a durable reinforcement. As a shortcut, a bar tack can be replaced with a dense whipstitch tack. In the example below, you’ll learn how to sew a traditional bar tack application.
1. Decide the bar tack's length and location on the garment and mark it with a line as shown.
2. Apply long stitches over the marked line, inserting them side by side until you arrive at the desired bar tack width.
3. Starting at one end of the layered stitch, apply blanket stitches perpendicularly over all existing threads and the fabric layer underneath as shown.
Apply the blanket stitches side-by-side to completely cover the long stitches underneath.
When applying the blanket stitches, the thread is always aligned underneath the needle point as each stitch is drawn through.
4. Repeat the blanket-stitching process until the entire length of the bar tack is filled as shown. The end result should be a rectangular tack with dense vertical stitches filling it.
​Learn more about how to apply a blanket stitch in this tutorial: Hand-Applied Overedge Stitches 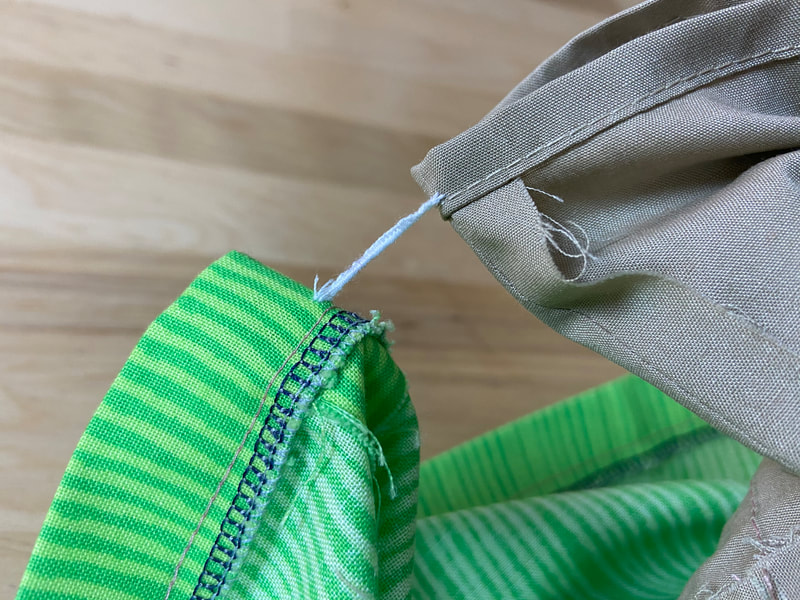 ​A French tack is different than all other tack applications as it is constructed in a free-hanging style. You have probably encountered this tack many times before (perhaps you didn’t know it was called a French tack), loosely connecting free-hanging lining layers to the garment.
When a garment’s lining is not sealed shut at the bottom, the lining layer tends to shift out of alignment during wear. French tacks ensure the lining layer maintains its correct alignment while providing about 1-2 inches of free movement. The extra length prevents strain and tension by preventing the lining layer from pulling on the garment during wear.
French tacks are most commonly used at the bottom of dresses and coat linings. Similar to the bar tack application described above, a French tack is constructed by covering a row of straight stitches with dense perpendicularly-applied blanket stitches. As opposed to the bar tack however, a French tack forms a free-hanging chain that links the fabric layers at a distance of 1"-2".
How To Sew A French Tack
​1. Stitch in place on the wrong side of the garment seam to secure the beginning of the tack. This stitch should not be visible on the face of the garment.
​2. Take another stitch through the free hanging lining layer, also at the wrong side of the seamline. Leave about 1-2 inches of slack.
3. Stitch a few more times from the garment seam back to the lining seam at the same points, leaving the same amount of slack in the process. Repeat about 3-5 times to create a group of layered threads as shown. ​More thread layers create a thicker French tack. ​
4. ​Starting from one end, apply side-by-side blanket stitches wrapping around the threads.
In the process, the blanket stitches will stack up to form the French tack chain. ​

​An arrowhead tack is applied directly to the fabric surface on the right side of the garment. The tack is a triangular shape that is filled with stitching. It provides reinforcement at pocket edges, unfinished garment corners, and other points that receive lots of strain and require durability during wear.
​Depending on the application, an arrowhead tack can be applied to multiple fabric layers or a single fabric layer. It has both a functional and decorative purpose. If used decoratively, an arrowhead tack can be applied in contrast-color thread or using a thicker yarn. You can also control the size and shape of the triangular arrowhead based on design and the garment's end use.
How To Sew An Arrowhead Tack
1. Using a quilting pencil or tailor’s chalk, start by drawing the triangle shape directly on the fabric surface at the exact desired location on the garment.
In this tutorial, each triangle point is marked with a number to better display the arrowhead’s consecutive stitching steps. Use this numbered triangle as a reference when stitching your own arrowhead application.
2. Stitch in place a few times within Point 1 as shown- this will lock the beginning of the stitch.
3. Next, take a small stitch from right to left at Point 3. Pull the thread to extend it over the triangle line as shown.
4. Insert the needle through Point 2 and bring it out at Point 1, right in front of the initial stitch applied in Step 1 above.
5. Repeat by stitching back up to Point 3, taking another small stitch from right to left. Move back down to Point 2 bringing the needle out at Point 1 again.
​6. Continue stitching as described until the entire triangle is completely filled.