​Spaghetti straps are (for the most part) fairly easy and intuitive to sew. The spaghetti strap style depends on both the garment’s design and how its neckline and armhole portions are finished.
​When sewing spaghetti straps, it is important to consider whether the garment is lined, faced or finished by other means. Most spaghetti straps are sewn into either a facing, lining or some form of bias binding or band. These techniques ensure that the spaghetti strap ends are securely and professionally enclosed within the neckline/armhole edge.
In this tutorial, you’ll learn a shortcut technique for sewing spaghetti straps. The individual straps are constructed from double fold binding, and extend from the bound armhole finish on each side. In other words, the binding that is used to finish the armhole edges extends over the shoulder to form the spaghetti straps.
​The binding can be left exposed along the entire application, or folded under and topstitched at the armhole edges. The choice is up to you. However, keep in mind that the folded-and-stitched version (shown above) creates a more durable, finished look. 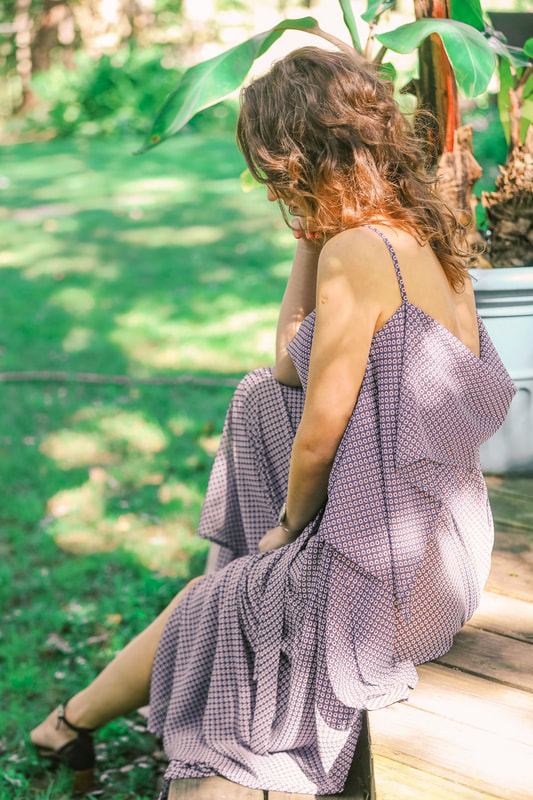 For best results, the spaghetti strap binding should be cut from the same fabric as the dress or blouse it finishes- unless a contrast effect is desired. ​
While you can use a store-bought, pre-packaged binding (one you would regularly use for armhole and neckline finishes), it does not always provide a professional look when used to construct spaghetti straps. Conventional pre-packaged binding works best on enclosed (folded under) fabric edges and is not built to stand alone. ​Fortunately, measuring and cutting your own binding to match your garment’s fabric is fairly simple to do.
Double-fold binding is constructed from bias fabric strips that are cut four (4) times the width of the finished folded binding. For example, if the desired (folded) binding width is ¼” then the bias fabric strip (or strips) will be cut at 1” width. ​The 1” strip is then folded three times to create the finished ¼” double-fold binding. ​
​To cover the entire length of the armhole and spaghetti strap, you may need to sew continuous bias binding. You can skip this step if the individual fabric strip is long enough to cover this distance.
For a step-by-step tutorial on cutting your own bias binding strips and sewing them together to form continuous binding, check out this tutorial: How To Sew Continuous Bias Binding

How To Sew Bound Spaghetti Straps

The spaghetti strap blouse in this example is unlined. The neckline is a semi-curved edge that is finished with a double-folded topstitch. If your garment has a neckline that is more curved, use binding, a shaped facing, or a bias facing to finish its edges.
Always finish the front and back neckline edges first before moving on to the spaghetti strap binding application.
1. Pre-fold the bias fabric strip and iron the fold lines prior to sewing the binding to the garment. Doing so will provide useful stitching guidelines, as well as allow it to fold much easier in the application process. ​Start by folding the bias strip down the center with wrong sides touching and iron to crease as shown.
2. Next, fold each lengthwise edge in towards the binding’s wrong side, such that the edges meet at the center crease line. Iron both folded edges.
3. ​Lastly, fold the binding one more time down the center to fully enclose all raw edges. Iron this final fold.
​For a 1” bias strip like the one used in this tutorial, the finished double-folded binding will now measure ¼” in width.
Do not sew the blouse side seams until after the spaghetti straps are attached. Since the binding will be turned under and topstitched, the seam allowance along the armhole edge is ¼” (always equal to the finished width of the double-fold binding).
4. Open the folded binding and starting at the underarm side seam edge, align one of the binding edges to the front armhole edge with fabric face sides touching as shown. Insert pins perpendicular to the edges to keep the layers in place. Pin the binding until you arrive at the finished neckline edge.
At this point, it is crucial that you know the exact length of the spaghetti straps. For reference, you can measure this directly on the body or a dress form. If working with a set of commercial patterns, this information should be provided with your pattern instructions.
In this case, the spaghetti strap length is 11”.
5. Measure 11” from the pinned neckline edge, and mark the binding with a pin inserted horizontally. You can also mark with tailor’s chalk- whichever you prefer.
6. ​Align the back neckline edge with the pin/mark applied in Step 5 above such that the armhole and binding edges align and fabric face sides are touching as shown.
7. Insert pins perpendicular to the edges as you continue aligning the binding to the rest of the armhole edge.
8. ​Stitch the binding to both front and back armholes separately. Use the binding fold lines as a guide.
9. Next, wrap the pre-folded binding around the armhole such that all raw edges are enclosed. The closed double-fold binding should now form an almost completed spaghetti strap extension. Iron the binding in this closed position (if needed) and insert a few pins to secure.
10. It helps to hand baste the binding in this position for extra stability during the machine stitching process.
​11. Working from the face of the garment, stitch the binding closed along the armhole edges and entire spaghetti strap length as shown. Use the fold lines as a guide. Remove the hand basting once complete.
12. Next, align the blouse side seam edges with right sides touching, and pin perpendicularly to secure.
13. Stitch the seam at the designated seam allowance. Stitch through the binding layers at the top, treating them as a continuation of the seam. ​
14. Finish and iron the side seam allowance open as shown.
15. ​As a last step, fold the binding inward, towards the wrong side of the garment, and iron the finished armhole edge in this position. ​Insert pins through the binding and garment layer perpendicular to the edge as shown.
As a sewing beginner, it helps to hand baste for extra stability in the stitching step to follow.
16. ​From the wrong side of the armhole, stitch through the binding and garment layer underneath, following the inner folded edge of the binding.
​In this process, you will be stitching from the back/front neckline edge all the way to the front/back neckline edge, passing over the side seam somewhere at the center.
​17. Last but not least, iron the finished armhole and spaghetti straps for a smooth professional finish.