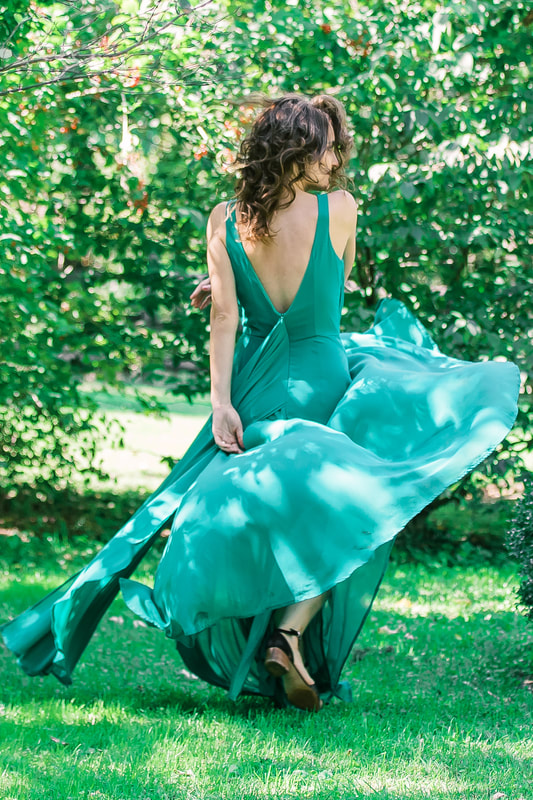 ​When a pattern is cut on the bias (diagonally in relation to the selvage edge), it results in a stretchy, draped fabric cut.
While the cut fabric edges may look like those of a regular straight cut, bias edges behave more like knits, stretching in the seam alignment and sewing process. Depending on the fabric, bias edges can be difficult to control. If not handled with care, the corresponding seam edges will stretch out and not properly fit together. ​
The trick to sewing bias edges is to handle them gently, lay them flat on the table in the alignment process, and always hand baste them prior to machine stitching. When sewing a bias-cut garment, you may find yourself in two common scenarios:
​In both scenarios, the fabric layers are at risk of stretching in the sewing process, both during seam alignment and as they feed under the presser foot. For that reason, always treat bias-cut fabric pieces like knits, using a shorter stitch length when sewing the seams. You may also consider a stretch thread but be careful to test it with your sewing machine first since some stretch threads break easily under machine tension.

Sewing A Bias Edge To A Lengthwise Edge

​When sewing a bias edge to a lengthwise edge, the two will behave completely different in the sewing process.
The bias edge will stretch while the straight, lengthwise-cut one will not. For that reason, it may seem as if the bias edge is much longer even though they are exactly the same length. ​
The trick to aligning these two edges is in carefully placing the bias edge on top of the straight one, and matching them inch by inch such that they maintain the same length throughout.
1. To pin a bias seam edge to a straight one, start by matching both top and bottom ends of the seam edges first. We know that the length of each edge is exactly the same so logically, both seam ends should correspond to each other perfectly. During this process, always keep the bias edge on top of the straight one and if space allows, keep the fabric layers flat on the table at all times.
2. Next, carefully align the remainder of the edges together by gently placing the bias edge on top of the straight one. Be very careful not to stretch the bias edge in the process.
​If you feel that the bias-cut edge has stretched, try to compress it back together such that it fits perfectly with its corresponding lengthwise edge without puckering or rippling.
​In fact, keep in mind that edge puckering is the most common issue when sewing a bias edge to a regular lengthwise-cut one.
To prevent unnecessary puckering, insert pins perpendicular to the edges as you carefully match them.
3. Apply a hand basting stitch to add extra stability in the machine stitching process to follow. Remove the pins once the edges have been basted. ​​
4. When machine stitching, the bias-cut layer should always be facing up, and extra care should be taken to prevent it from stretching and puckering under the presser foot.
Particularly when working with flimsy, drapey fabrics, the presser foot can add some tension to the top bias layer causing it to slightly ripple. Again, this may give the impression that the bias edge doesn’t fit with the straight edge underneath even though we know this is not the case.
As you stitch, you may need to lift the presser foot periodically to release some of the pulling and strain in the top fabric layer (bias). ​
5. Once the bias seam is stitched, remove the hand basting using a seam ripper.

Sewing a bias edge to another bias edge is often similar to sewing a knit seam. If you’re not careful, the seam can stretch out of shape. However, you may find that a bias-to-bias seam is a bit easier to sew than a bias edge to a straight edge.
The trick to sewing a bias seam is not to stretch the edges in the alignment and pinning process. The easiest way to achieve this is to always lay your fabric pieces flat on the table.
You should avoid hanging the edges off the table edge or lifting them up in the air as you align and pin. When working with heavy fabrics and lengthier garments, the bias seams will stretch and may permanently lose their structure and shape. ​
1. Insert pins through the top and bottom ends of the seam first.
2. Next, carefully match the remainder of the bias-cut edges to each other, being careful not to stretch them in the process.
3. Apply a wide basting stitch to keep the layers together.
​Hold the garment up and make sure the seam is neither stretched nor compressed in. ​At this point, if you feel that the basted bias seam appears to be shorter than it should, leave it hanging for a couple of hours prior to machine stitching.
4. Since bias seams are handled similar to knits, use a shorter length stitch in the machine stitching process. You may even consider using thread with some stretch. However, make sure the thread is compatible with your sewing machine and does not break or create tension issues.
​As in the bias-to-straight edge process, if you find that the presser foot is puckering the bias seam, lift it periodically to release some of the strain. However, make sure the needle is inserted through all fabric layers each time the presser foot is lifted. Doing so will prevent possible stitch distortions.
5. Remove the hand basting once the bias seam is fully machine stitched.